Tony has published four books and over 40 non-fiction articles and reviews, concerning six main topics: American railroads, supernatural folklore, railroad-subject photography, North Carolina music, and reviews of railroad-subject books. He serves as an advisory editor of the journal Railroad History. His interest in railroad history led him to co-found the Norfolk & Southern Historical Society, where he serves as a Board member and corporate Secretary; he prepared the Society’s successful 501c3 application. Tony’s article on Lucius Beebe, with Dan Cupper, won the 2006 David P. Morgan Award. Tony has read from his book, Ghost Train!, about twenty times since 1999, and also has given a number of presentations about railroad history and railroad-subject photography.

O. Winston Link photographed the Norfolk and Western, the last major steam railroad in the United States, when it was converting its operations from steam to diesel in the 1950s. Link’s N&W project captured the industry at a moment of transition, before the triumph of the automobile and the airplane that ended an era of passenger rail service. His work also revealed a small-town way of life that was about to experience seismic shifts and, in many cases, vanish completely. Including a collection of more than 180 of Link’s most famous works and rare images that have never before been published, this book offers a moving account of the people and communities surrounding the last steam railroad.

4 October 2012 article in The Atlantic at http://www.theatlantic.com/technology/archive/2012/10/a-gorgeous-photographic-elegy-to-the-last-great-steam-train/263220/

Reevy’s book is also featured in the Wall Street Journal, The Washington Post, Reader’s Digest, and many other newspapers and journals. 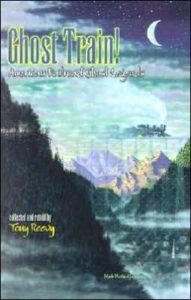 Nothing sounds more lonesome, more haunting, than a train whistle heard from far away–it lingers in the mind, taking on substance in the imagination. It implies dramatic partings, joyous reunions, devastating wars and illnesses, mysterious journeys of all kinds. No wonder so much emotion has always been attached to train journeys. Now, those of us who love trains–and enjoy a little shiver running up our spines–have a wonderful treat in store: Ghost Train! Tony Reevy’s evocative writing and careful research bring to life the legends of yesteryear in this well-researched an entertaining book. Great photos and maps are an added bonus. So buy your ticket and hop on board the Ghost Train! — Lee Smith, author of Oral History and Fair and Tender Ladies